When the umbrella was first opened in Britain during a rainstorm, passersby ridiculed the brolly-user, pelting him with trash. They thought the gadget resembled a lady’s parasol. After the Wright Brothers’ first flight, French general Ferdinand Foch poo-pooed the airplane as “an interesting scientific toy with no military application.” The personal computer, coffee, cabs, and vaccines all had similar plot lines.  Transformative ideas have been born, more often than not, from challenging beginnings.

Today, there are few people who don’t have an umbrella and few countries without an air force. Early on, however, these inventions struggled for credibility within environments full of opposing habits and beliefs.  Fortunately, the creators believed in their work, persisted against the odds, and, with the support of forward-thinking, early adopters, survived the naysayers to ultimately win over the rest of the population.

As these innovations reached peak popularity, they spurred tangential ideas—the umbrella led to rainproof awnings and umbrella stands while the airplane expanded to general civilian use and a wealth of new industries. These tiny new ripples created sea-changes within their industries, ultimately changing aspects of our culture. In 1890, French philosopher Gabriel Tarde named this process—the adoption and spread of new ideas—The Laws of Imitation.

When Tarde introduced The Laws of Imitation, it resonated with the academic community and beyond, spurring tangential and counter-hypotheses in multiple fields.  One of the people who took Tarde’s idea in a new direction was Everett Rogers, a professor of communications.  Rogers was interested in the second law of imitation—the exponential take-off—or what happens to an idea next, after it’s accepted.  He wondered about how, why, and at what rate new ideas, including technology, spread.

Rogers’ Diffusion of Innovations theorized there were four elements influencing the spread of a new idea:
– the innovation itself
– communications channels
– time
– a social system

The “social system” he envisioned had five segments divided by speed of adaptation—the Innovators, Early Adopters, Early Majority, Late Majority, and Laggards.  As you can see below, there is a proportionally tiny pool of innovators, and then everyone else. 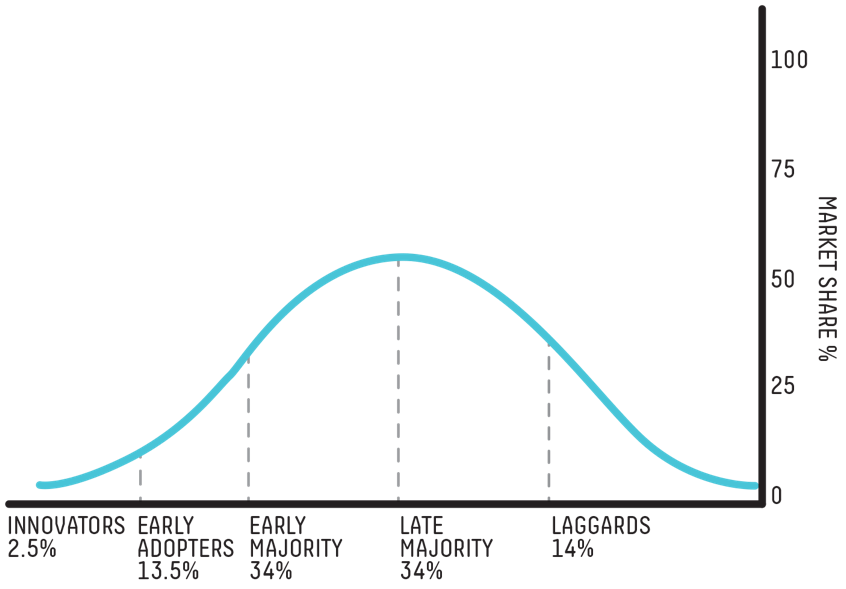 Rogers recognized big ideas not only change how humans operate in the world, they alter culture.

To innovate anything, you must know the culture you are about to drop your idea into. Consider the typical company touched with a dash of dysfunction. At the low end are the “actively disengaged.”  They are unhappy about work and want everyone to know it.  At the high end are “intrapreneurs.”  They are aware of the big picture and proactively seek ways to improve all aspects of the organization.

In thinking about how Tarde’s and Rogers’ concepts might apply to a company considering change and innovation, we at DefCult wondered if combining Rogers’ social system graph with the various engagement levels in a typical company might give us some insight.

It turns out they align very nicely with each other. 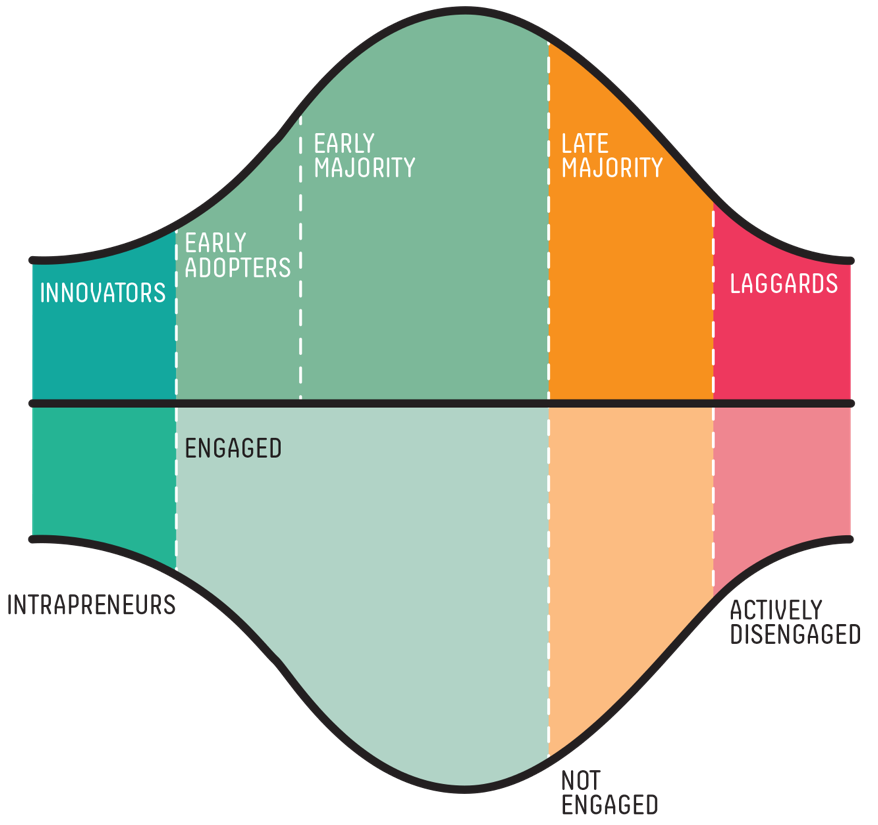 The two main takeaways in the graph above are 1) innovators and intrapreneurs make up a similar percentage of these defined groups 2) the people most engaged in their work AND most likely to adapt to change are approximately 52% of a typical company or culture.

Tipping your Organization’s Culture
If you have ever been tasked with improving a struggling organization, you probably found the existing organizational culture to be part of the problem.  Like the inventor with the radical idea, this is that hostile environment you have to push through.  First, you must find that small group of innovators like you, then earn their support.   Next, use that support and momentum to convince the next 49.5%— the engaged, early adopters and early majority—to come over to your side.  At DefCult, we call this practice culture tipping.

But, you say, ‘the naysayers are the loudest and most destructive.  This won’t work unless I change their minds first.’ This line of thinking is logically sound, tempting to believe, and ultimately untrue.  Studies show focusing effort on engaged employees versus the actively disengaged has more potential and creates more value for the organization, as a whole. In addition, when the majority of a culture tips towards a new value or way of doing things, those who do not identify will either adapt or leave, thus ultimately resulting in a stronger culture, based on the mutually-agreed upon, desired value.

I first discovered culture tipping working with a university music school that was experiencing an existential crisis. Faced with modernizing with the times or shutting down, leadership brought in a dean with some revolutionary ideas for changing the music school model.  His first mistake was assuming all staff and faculty understood the gravity of the situation.  His second was trying to shift organizational direction without first assembling a posse for support.

When the dean unveiled his strategic vision plan, it was met with unconcealed hostility from faculty. At first, he tried to win over the naysayers with little success (and more than a few choice words said behind his back). One professor who believed in his vision suggested prototyping parts of his idea on a small scale first—a few single elective classes. In this sort of lab environment, they could experiment and make tweaks without judgment.

After one semester of great student feedback, they knew they were on to something.  Using this momentum, the dean quietly identified and invited other intrapraneurs on the faculty to experiment with the curriculum.  He also leveraged the outside world, bringing in innovators, like DefCult, to provide different perspectives and credibility to his approach.  Taking a page from Rogers’ theory, DefCult helped speed the innovation’s spread by developing a number of unique communications channels both internally and externally.

Fast forward five years, today, the school’s reputation is now one of innovation, within both the university and the music world, at large.  Faculty who were doubtful or hostile to the new direction have come around or moved on.  The dean knows there will always be a percentage of intractables, but this doesn’t affect his vision forward for the organization.

So, how can you tip your own culture? It’s important to remember, no successful organizational change is sustained solely by management decree.  You need a posse to support and spread the idea. In fact, the beauty of culture tipping is that anyone, at any level of an organization, has the power to do it.

Let’s say you want to push innovative thinking in your workplace:
1) Identify your potential posse and invite them to engage in a Where Might We/What If? dialogue around innovation and the organization. Look for colleagues who fit the description of an intrapreneur.  Do they look for solutions to roadblocks, like to experiment, and/or are creative?
2) Invite interested parties from the What If? session to collaboratively develop their ideas.  This can be in the form of a short-term development lab.
3) For your lab, provide space, time, support, and resources to develop the ideas.  We find design thinking is great for developing new ideas. (Shout out to Stanford, where we learned it.) This process promotes experimentation, cross-collaboration, and the user’s needs. Consider whether to lead the team or let the group make the initiative their own.  The latter can speed-up the diffusion process to your network but it requires trust and a more hands-off approach.
4) Establish a date, time, and place to unveil your first prototype. Setting constraints improves results.
5) Quietly seek feedback on your prototype from a handful of employees who are engaged, early adopters. Make changes where necessary.
6) After you feel the prototype has positive traction, implement Roger’s Diffusion of Innovations– communications channels, time and a social system- to achieve wider adoption.

Like any inventor with a transformative idea, you must believe and persist, even if the beginning feels daunting.  Your aim is 52%.  A lot of experimentation and tweaking may be necessary before you reach this goal, you may find more support outside your organization than inside it, at first, but changing any aspect of a culture does not happen overnight. To ensure the best chance for sustainability, remember to provide education, guidance, incentive, and free-will every step of the way.

Elizabeth Hinckley is the founder of DefCult.